I have heard from several of you now that have spotted quite a few toys on clearance from 30% to 50% off. Some of you have reported it mixed in throughout the aisles here and there while others like Phoebe & Jan found whole aisles of toys at 30% off at their stores in Texas. So while it is a little early to find clearance toys migrating to their own aisles- and clearance varies greatly from store to store,  it seems like you will definitely start wanting to keep an eye on toys a little sooner this year. 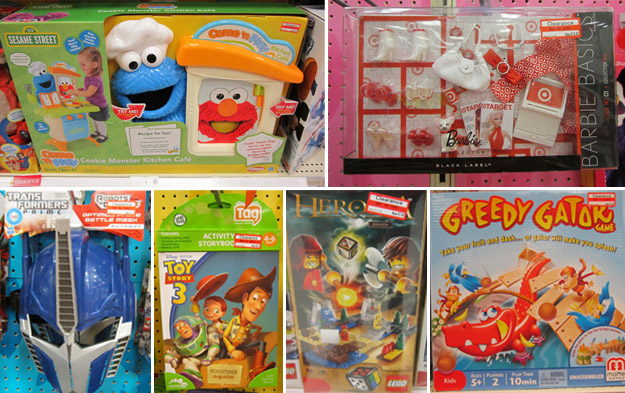 Lots of Sesame Street, Disney Princess, Littlest Pet Shop, LeapFrog, LEGO, and more have been spotted. Heather found several masks on clearance including Transformers Prime Battle Mask, Spider-Man’s Lizard Man, and the Avengers Iron Man all 30% off. While most toys seem to be at 30% some were spoted at 50% Off like the Barbie Basics Target Exclusive down 50% to $7.48 and the Lego Heroica Game also at $7.48 down to 50% Off.

Eventually most stores will move toy clearance to their own aisles, and whatever survives usually will go to 70% Off in the first days of January, but nothing is set in stone- so it’s something to just keep a close eye on in the coming weeks.

–Thanks to Phoebe, Heather, Marcia, Jan and Lisa for the heads up!