Here’s what has been spotted on clearance this week along with any coupon matchups I could find. Remember- clearance can vary greatly from store to store– there is no guarantee you will find the same or for the same discount that those who contributed to this post have. But I try & list specific varieties, prices & other details when I can, since not everything gets stickered and sometimes it’s worth a quick scan to check.

Keep sending us those emails and photos of your clearance finds and we will try to include them in our Thursday roundup whenever possible. Contributions are always appreciated!

GROCERY: There has been quite a bit of frozen food on clearance lately as much as 50% off and with the new $1.00 Off Frozen Food Purchase of $1+ OR $1.00 Off Market Pantry or Archer Farms Products $1+ Target Mobile Coupons (text FRESH to 827438) x4/20, this will make for even better clearance deals in frozen!

Heather spotted Yoplait Smoothies at 30% off marked down to $1.88 and after the awesome $1.00 Off Frozen Food Purchase of $1+ Target Mobile Coupon (text FRESH to 827438) x4/20, they will only be .88 cents if you find the same (regularly 2.69!) Keep in mind you can use the frozen foods $1 Target Mobile coupon for any of the deals below you may also find at your stores….

Kelley spotted several items at 50% off including Philips Maryland Crab cakes down to $3.48 and Red’s Bean & Cheese Quesadillas or Bean & Rice Burritos as low as $1.72.

Also spotted were Jose Ole Taquitos, Lightlife Meat Free Frozen Meals, Dr. Praeger’s Meatless Sausage or Chickenless Patties, Tex Mex Burgers from 15-30% off and we have some coupons to make for nice deals…

Several frozen desserts have been spotted on clearance this week at 30% off – including Marie Callendar’s Pies, Delizza Belgian Mini Cream Puffs, Pepperidge Farm Milano Cookies Cake at $4.48 each and we have several coupons to make for some nice deals.

ELECTRONICS: Watch for quite a bit of new clearance around the Electronics department. Several Garmin and TomTom GPS Navigation Systems were spotted at 50% off as low as $79.98.

Also, lots of GPS accessories were marked at 50% off which included cases, gripper dashboard & windshield mounts, and more down to $6.28.

Lots of earbuds and headphones from Philips, Sony, Skullcandy, iHome Designer Series, Fashion Macbeth series at 50% off each and as low as $4.98.

Another nice find in electronics were AT&T and Panasonic Cordless Telephone Handsets and Answering Systems at 50% off as low as $36.48.

HEALTH & BEAUTY: We have several new finds in Health and Beauty this week up to 50% off. Teena spotted Coppertone Tanning Lotion 30% down to $4.88 and Neosporin Essentials Trial Pack at 50% down to $5.74. We have some nice coupons, if you have an interest…

In addition the Garnier Olia hair coloring I posted about yesterday, there are several other hair coloring products on clearance as well – including Garnier Nutrisse, L’Oreal Feria, Clairol Natural Instincts and Perfect 10 from 15-30% off as low as $4.18 and we have several coupons too…

Several of you have mentioned the Dove Bar Soap 4-pks  and Dove Men+Care Bonus Packs still hanging around at 30% off. We have several stacking coupons which make for some nice deals.

Suave Smoothing with Cocoa Butter & Shea Travel-Sized Lotions were spotted at .65 cents each – these are great to throw in your handbag. Gillette Fusion ProGlide Shave Gel (singles and twin packs) were 15% off as low as $3 and we have some coupons which could make for nice deals. Poise Roll-On Cooling Gels were spotted in health & beauty at 50% off down to $2.98 and these would be FREE after coupon, if you find the same.

Emily found Threshold 3-piece duvet cover sets at 50% down to $34.98 and Threshold decorative pillows down to $13.98. Take a look at your stores to see what you can find and here’s a roundup of all the Threshold coupons I know of at this time…

TOYS: John reported finding a few new toys on clearance this week, up to 70% off including lots of Lego Monster Fighters, Lord of the Rings, Brain Attack Hero Factory puzzles as low as $5.98 and more. He also found Leapster GS Explorer accessories at 50% off down to $7.48 each.

CLOTHING: Clothing in all departments is worth taking a look at these days – especially since there are so many coupons out right now! Women’s, Men’s, & Kids items have been spotted at as much as 70% Off. Vanessa found several pieces of Prabal Gurung clothing and licensed women’s tees at 70% off as low as $3.88. She also spotted some Gilligan O’Malley sleepwear tops and bottoms at 50% off as low as $6.48. 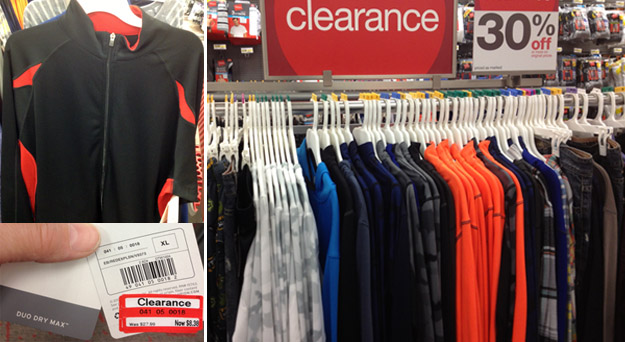 Lots of men’s clothing were spotted on clearance at 70% – including Merona & Mossimo dress shirts, Vneck sweaters, short sleeve polos, Denizen Jeans, Champion workout gear, and more as low as $4.48. So take a look at your stores to see what you can find and here’s a roundup of all the apparel coupons I know of at this time…

HAPPY CLEARANCE HUNTING EVERYONE!  Remember- you can always sort the blog by CLEARANCE to see the latest finds you may want to watch for too. Feel free to let us know what your latest finds are in the comments below and big thanks for your emails, comments & photos to Jen, John, Julie, Teena, Vanessa, Heather, Beth and Kelley. And a big special thanks to Emily!