UPDATE THURSDAY 7/25: So today there were only a very, very few comments of some stores dropping to 70% today. It appears most stores did not drop to 70% though so it’s looking like for the majority of us it will be next week. Reports of 70% came from Seth in Cleveland, Ohio, Sabrina reported 70% in Oswego Illinois, and Rosemary was 70% off at Bolingbrook, IL. (-Thanks for your comments folks!) But let me know if any more of you found the drop at your stores!

I have gotten lots of questions asking about the progress of the Big Summer Toy Clearance, and as usual, I can only speculate. While we have been seeing clearance toys for weeks now anywhere from 30-70% Off, usually around the end of July we see a big drop on lots of toys all at once to 70% Off. So the big question is- will it happen tomorrow? Tomorrow is the last Thursday in July after all and next week would put us at August 1st. But I have to admit I am a little perplexed this year as to whether the drop will actually happen tomorrow or not. 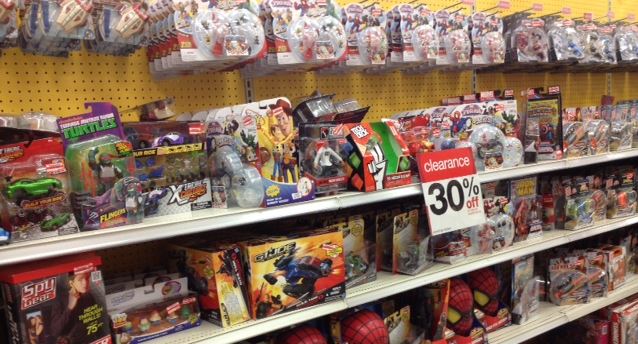 Kelley checked in at her store today and saw two aisles starting to be filled strictly with clearance toys and marked with signage of 30% or More. While I always feel like they should sit in their own aisles for a bit and drop to 50 then 70 – sometimes that doesn’t happen. For example, last year my store moved their clearance toys to their own aisles on a Tuesday and 2 days later there was an aisle full of 70% Off toys. So if you’ve been chomping at the bit, you may not want to risk it and show up tomorrow just in case.

Not all stores may have the room to move toys in their own aisles either- so be sure and check all around the toy department and if you have your eye on something particular- you may also want to scan to check just in case. Even if for some reason the toys do not drop until next week, the bottom line is- the toy shelves have to be reset – and all these clearance toys will need to be sold or eventually salvaged – so keep a close eye on them!