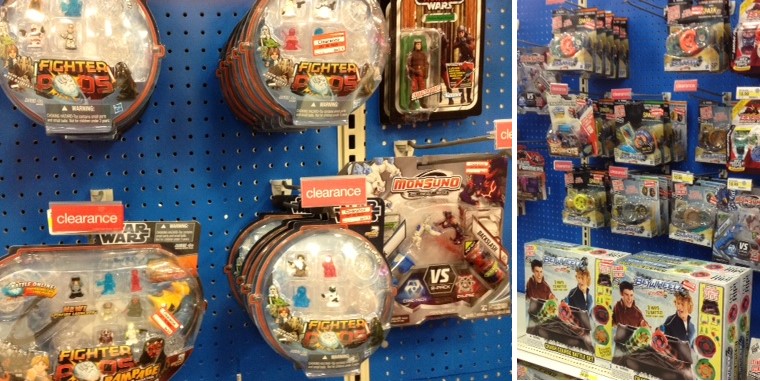 So after getting quite a few messages & comments from readers about some of their stores dropping to 70% yesterday on toys, it sounded very hopeful that today would be the day and many of you have in fact reported finding 70% Off today at your stores too. Not everyone is going to have all clearance toys in one aisle either. Some stores will mark toys to 70% Off right in the regular aisles, so be sure to take a good look around. At one of Kelley’s stores a large percentage of the toys dropped to 70% but they were all mixed in – in the regular aisles.

If you still have your $5 Off Monsters Inc Roll A Scare Playset Target Coupon (no longer available to print but valid up until 8/3), you may luck out like Jack did. He found the playset 70% Off down to $5.98 at his Arkansas store and paid just .98 cents after coupon! Jo actually found 70% Off at her Carmel, IN store yesterday and found a Laugh and Learn puppy, Baby Alive, a Leap Frog Guitar and more all at 70%. Erin found select beyblades toys at her Target in NJ 70% off in the regular aisle and even used a Target Cartwheel for an additional 5% off. She paid $9.88 for the above set, regularly $34.99.

I also heard some of you were not so lucky – well at least so far today. Brandy had toy markdowns in her Orlando store today, but the team didn’t finish because computers went down. I got the same message from Theresa G about computers being down. And oddly enough while Kelley had great luck at one of her Maryland stores with no issues and working scanners, she found quite the opposite at her other store. She took this above picture with the clearance toys sitting in their own aisle with nothing marked to 70% as of this morning due to PDAs being down and the system being down, with no working scanners or anything. So unfortunately there are some of you who may also be at a standstill today.

But it’s something for each of you to check in at your own stores to see where you are at. Remember everything may not be together either. Cruise the regular aisles, use the scanners to check prices and be sure and check Target Cartwheel for any additional discounts on anything you may find. And good luck to you all! Let us know what you find and thank you so much everyone for all the comments and email updates!