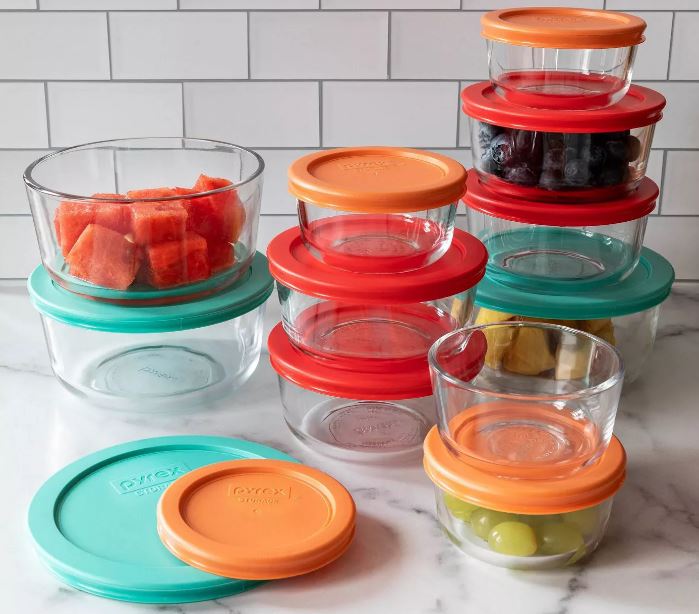 There are some big savings to be had at Target during the Early Black Friday Deals (Holiday Best deals)! If you are in need of food storage containers, right now you can grab big savings on this Pyrex 22 piece set at Target both in stores and online. Just keep in mind this Pyrex Target deal is only while supplies last.

Regularly priced at $49.99, right now this popular set is priced at just $21.99 in the Early Black Friday deals at Target! Dishwasher and microwave safe, the set is comprised of four 1 cup, four 2 cup and three 4 cup glass round containers with matching lids.

This Pyrex Target deal should be valid thru next week, but you might want to grab it sooner rather than later in case it sells out. It has an average of 5 star reviews too, and it’s also stain and odor resistant! These are especially nice to have on hand during the holiday season.

Worried about finding a lower price after you buy? Read our post about Target’s Holiday Price Match guarantee.

And, as always, if you have a Target REDcard you will also get an additional 5% Off making for an even better price! Don’t have a Target Redcard yet? Right now, you can score a coupon for $40 off a future $40 purchase at Target when you sign up for a new red card account thru December 10th.

For more awesome deals at Target this week on kitchen appliances and in other parts of the store, be sure and check out the weekly ad scan or sort the blog by the Weekly Ad Category!

You can also check out the TotallyTarget Cheap Finds page for other great deals at Target at the top of the page, and deals elsewhere at the bottom of the page!